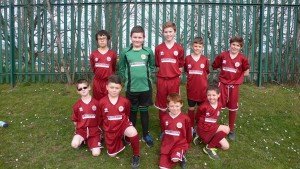 Orrets Meadow, based in Moreton, Wirral, describes itself as:

a special school for children aged 5-11, who have a statement for SpLD and/or Social Communication Difficulties including Autism. Children will have difficulties in reading and spelling. They may also have difficulties with maths, organisational skills, spatial awareness and fine/gross motor skills.

Helping Orrets Meadow is personal for us.

Our bookkeeper Vicky’s son, Frankie, is autistic and goes to the school. Occasionally Frankie will come into our office in Bootle to see us.

He’s great fun to have around and we can see that being at Orrets Meadow is having a positive impact on him. This, in turn, helps Vicky and her family. 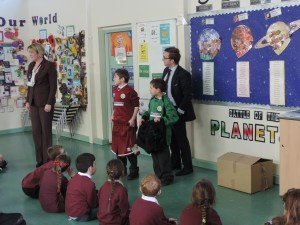 The school’s mission it “To raise aspirations of every child and give them confidence to fulfil their potential through positive experiences”.

With this in mind, headteacher Carolyn Duncan reached out to parents asking if anyone could help replace the school football team kits. Vicky emailed Kevin Donoghue, our solicitor director, asking if the firm could help. Knowing the great work the school does, we were delighted to step up.

Kevin and his team immediately contacted Mrs. Duncan and offered to obtain and pay for the kits in full. That way Mrs. Duncan could get back to running the school knowing that matters were in hand.

After painstaking research and numerous design drafts back and forth, Mr. Donoghue and his wife Stephanie personally delivered the custom-made kits to Orrets Meadow at a special assembly.

We wanted the team to feel pride in ownership. So we invested in high quality, Errea kits, the same as those used by some national football teams and football league clubs.

It worked. The team were thrilled to represent their school in their new kits and won their first game 7-1! They have enjoyed continued success since.

The Wirral Globe wrote about our involvement and we continue to follow the team’s progress as part of our commitment to Orrets Meadow School. 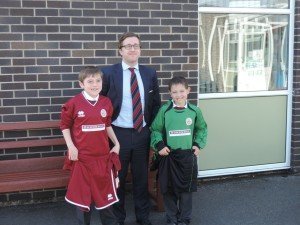