If the media and politicians are to be believed, road accident claims are straightforward.

But, as this case study shows, they can be hard-fought and involve different areas of law.

This means that it pays to instruct an expert in road accidents. Here’s why.

On Hallowe’en in 2013, Mr P was driving his Mercedes-Benz with his girlfriend along a road in Liverpool. They were both wearing seatbelts. It was 6:20pm at night; dark, but with street lighting.

Mr P moved his car right, towards the centre of the road, to drive past a parked car on the left.

Suddenly, their car bounced up a high kerb and crashed into an unlit central reservation pedestrian “refuge”.

The impact was hard and brought his Mercedes to a complete halt. Both Mr P and his girlfriend were thrown about, the airbags went off, and his car was badly damaged.

Mr P was shocked and confused. Why did he hit a kerb in the middle of the road? Only after the road accident did he realise that he had hit a pedestrian safety refuge (shown in the photograph below). 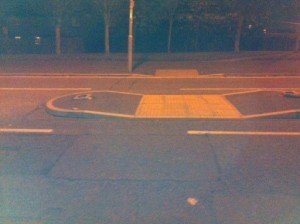 The unlit pedestrian safety refuge which caused the road accident.

Mr P realised that bollards, which should have been in place and illuminated to show the refuge, had been removed. 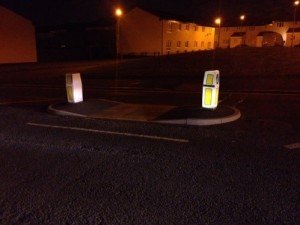 A pedestrian safety refuge on the same street with lit bollards.

Shortly after the accident Mr P felt pain in his neck, back, and noticed burns to his right arm from the airbags. 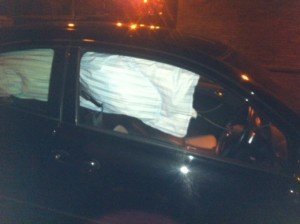 Airbags deployed on Mr P’s car after his road accident.

He went to a walk-in centre the next day where his injuries were confirmed and was advised to take anti-inflammatories and painkillers.

He had to work from home for a week, had disturbed sleep, and couldn’t work out in the gym or run for a while.

For a short time after the accident Mr P needed help with domestic chores from his mother. He also had to pay an insurance excess for his car repairs, and was without the use of his car for four weeks while it was being repaired. His insurance premium went up as a result of the accident and Mr P had to pay for medical treatment and examinations. 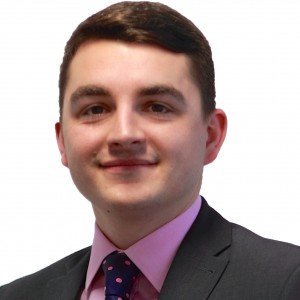 Daniel Fitzsimmons, an accredited Litigator with the Association of Personal Injury Lawyers, works at Donoghue Solicitors.

Daniel advised that his claim was unusual from a legal point of view because it related to a defect on the highway (a pedestrian bollard without lights) and not just an accident between two cars.

This meant that, even though the accident happened in a car, it was in fact a public liability case and not a road traffic accident claim.

He agreed to represent Mr P under a conditional fee agreement (also known as “no win no fee”.)

On 25 November 2013 Daniel submitted Mr P’s claim to the Council, which was responsible for the highway, via the Public Liability Portal for Low Value Personal Injury Claims.

(The “Portal” is an electronic claims management system and the way that most claims valued between £1,000-£25,000 are handled between the parties to a claim.)

Daniel argued that the Council was responsible for Mr P’s accident because it failed to adequately maintain the carriageway/ central reservation/ illuminated bollards.

Despite the circumstances and Daniel Fitzsimmon’s view that this was a public liability matter, on 4 December 2013 the Council’s agents rejected Mr P’s road accident claims, arguing that the matter had been wrongly submitted on the Public Liability Portal.

Even though he knew this was wrong, to keep his client’s claim moving, Daniel re-submitted the claim under the road traffic accidents Portal.

The Council did not respond within the required period. Mr Fitzsimmons wrote to its legal department confirming that the claim would continue outside of the Portal, meaning that the Council had to deal with it under procedures in place before the Portals were introduced.

The Council had three months to investigate and confirm if it accepted liability. On the last day possible its agents denied liability and sent a s.58 Highways Act (1980) defence. This is used in public liability cases, not road accident claims, confirming Mr Fitzsimmons’ initial view about how the claim was framed. It also showed that the Council now agreed that it was wrong to reject the case in the Public Liability Portal.

The documents sent by the Council in support of its denial were similar to those used in tripping accidents, and are very different to anything road accident claims handlers normally see.

Fortunately, Daniel Fitzsimmons is a Chartered Legal Executive and member of the Association of Personal Injury Lawyers. He is trained in all aspects of personal injury accident claims, so was quickly able to interpret the records sent by the Council.

He noted that the Local Authority used a system of quarterly walking inspections, where a trained inspector was to inspect and report any defects.

In Daniel’s expert opinion, the disclosure provided was incomplete, and without further documentation he could not accurately assess the merits of his client’s case. This meant that the Council had not complied with the Civil Procedure Rules, which parties must follow in civil legal cases like this.

He went back to the Council’s agents and demanded further documentation. They did not respond so, to keep the pressure on, Mr Fitzsimmons issued a “Pre-Action Disclosure Application” at Liverpool County Court. He demanded a hearing before a District Judge to order the Council to comply.

The day before the hearing the Council agreed to provide the information.

Again, the information provided was incomplete, so Daniel threatened to take the Council to court for a second time.

Instead, on 12 February 2015, the Council belatedly accepted liability. While Mr Fitzsimmons was glad that he had forced the Council to accept responsibility, he was also very disappointed in its conduct.

Because the Council failed to accept responsibility in November 2013 Mr P was forced to wait more than a year longer than necessary, and Mr Fitzsimmons had to do a lot of extra work.

The irony that, rather than defendants and insurers, it is the innocent accident victims who are accused of driving up the costs of litigation, was not lost on him.

Once liability was admitted, matters progressed quickly. Mr Fitzsimmons arranged for his client to be examined by a specialist doctor and identified the full extent of his out-of-pocket expenses.

Daniel settled Mr P’s claim for £4,500. This was an excellent settlement which, in Mr Fitzsimmons’ opinion, was more than his client would have received at court. He also got confirmation that Mr P’s insurance no claims discount would be re-instated, putting him in the pre-accident position.

Ultimately Daniel’s expertise and determination made sure that justice was done, despite the Council’s delaying tactics and wrong-headed defence.

For expert, personal help with your road accident claims contact Donoghue Solicitors on 08000 124 246 or via the online form on our website.