If you are injured in an accident at work you might be encouraged to instruct your union solicitors to claim compensation. That’s not always the best option. In this case study, read how union solicitors dropped a dock worker’s claim, and how we stepped in to help him win the compensation he deserved.

Claim: Accident at work claim for psychological trauma and other losses 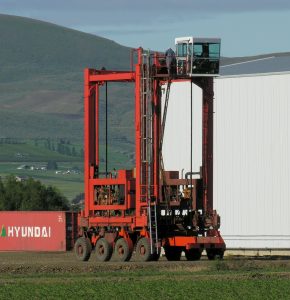 How Charlie Described the Incident

Mr Mousley worked at the Port of Liverpool Seaforth Container Terminal. He drove a Straddle Carrier, a large vehicle which is used to load and unload containers from ships and move them around the port. His Straddle Carrier broke down and leaked hydraulic fluid from the engine, filling Charlie’s cab with smoke. Charlie thought the Straddle Carrier was on fire and activated the in-cab fire extinguisher. He could not see anything. He feared for his life. Charlie escaped by climbing down the 50 foot ladder from the cab to the ground. The ladder was slippery with hydraulic fluid. He nearly fell.

Mr Mousley is an asthmatic. The smoke triggered a coughing fit and his chest was tight. He went to hospital in an ambulance.

Charlie suffered lasting psychological trauma. He had flashbacks, nightmares, and sleepless nights. He was angry and moody. His doctor prescribed antidepressants and medicine to help him sleep.

Mr Mousley was off work for a few days. He returned to work as a Straddle Carrier but felt unsafe and suffered with flashbacks. He found work as an apprentice plumber and left his job on the docks. Even though the new job paid less, Charlie was relieved that he did not have to work at height in a Straddle Carrier.

What the Union Solicitors Did

Charlie contacted his union solicitors for advice. They took his accident at work claim but dropped it a year later. The union solicitors told Charlie they did not think he would win compensation. Mr Mousley felt let down and frustrated that he had wasted a year dealing with matters.

Charlie spoke to a friend about it. His friend recommended Donoghue Solicitors because we helped him win his dock accident claim.

Charlie spoke to Daniel Fitzsimmons, a Chartered Legal Executive and member of the Association of Personal Injury Lawyers.

In Daniel’s opinion, Charlie’s employers were wrong to deny liability because they failed to maintain the work equipment (Charlie’s Straddle Carrier) in efficient working order and good repair.  And the Legal Executive felt that Charlie had a strong claim for damages for his psychological trauma. Together, this meant that Charlie could seek compensation for personal injury and other losses, including lost earnings.

Daniel agreed to represent Charlie on the same terms as his union solicitors, but under a conditional fee (“no win no fee”) agreement.

The 3-year limitation period to bring a personal injury claim was about to expire so Daniel got to work right away. He issued protective proceedings at court to protect Charlie’s rights.

Daniel sent details of Charlie’s claim to his employers. Their insurers denied liability, saying that they found “no evidence which substantiates and/or verifies the existence of those allegations to such a degree as to warrant a concession as to liability in this case.” Mr Fitzsimmons demanded documentation from the insurers to consider the merits of their denial.

He arranged for a Consultant Psychologist to medically examine his client and write a report. The expert’s assessment was that Charlie developed a phobia about operating a straddle carrier, anger, low mood, and a chronic adjustment disorder. He recommended Cognitive Behavioural Therapy if it did not resolve over time.

Daniel served detailed “Particulars of Claim”, which described Charlie’s case in legal terms. His employers instructed solicitors to defend the claim. In the Defence, they accepted only that they were Charlie’s employers, and maintained the denial of liability. They put Charlie to “strict proof”, meaning that he had to prove every aspect of his claim, and alleged that he caused or contributed to the accident by his own “contributory negligence”.

Daniel was not put off. He progressed Charlie’s case and prepared it for trial. Both sides exchanged documents, witness statements, and other evidence to support their cases.

No offers were on the table even though the trial date was fast approaching. Despite the Defendant’s firm position, Mr Fitzsimmons suggested to his client that they make a “Part 36” offer to settle his compensation claim.

Daniel made a formal offer, which put the employer under pressure to consider matters before trial. After negotiations in writing and by phone, he settled Charlie’s claim for £11,000 plus legal costs.

Charlie was thrilled. He left a 5 star review on google which described his experience. He summarised his case:

I was in a accident at work, where I was working at Peel Ports, Liverpool Docks driving a straddle carrier (mobile crane). When the engine went on fire I was engulfed in smoke and had to make a decision to climb up past the engine and then down the 50 ft crane.

Mr Mousley also talked about his issues with his union solicitors, and how he came to instruct Donoghue Solicitors:

My union solicitors, EAD originally took on the case who were extremely slow and uninterested from the get go. After dragging their feet for a year they advised me that they believed the case was not worth proceeding. I then made an excellent choice by taking my case to Donoghue Solicitors who was recommended by a colleague who had also won an accident at work case with this firm. Daniel Fitzsimmons was the solicitor who took on my case and couldn’t believe EAD had let my case go. He honoured my union agreement out of courtesy, to not take a percentage of the claim proceeds like most no win no fee agreements.

Charlie described how Mr Fitzsimmons worked round his schedule:

Daniel was amazing from start to finish he put a lot of time and effort into the case and kept me updated every step of the way by explaining things in plain English. He could not have done anything more for me and supported it right up to the stage were it was going to court and talked me through the process and made me feel at ease. He even called me out of business hours to suit my work schedule. As I now work out of town during the week, he stayed late on Fridays for me to sign documents which could of easily been left for his assistant to attend to, but always made the effort to see me and give me updates.

He explained how his claim settled:

Luckily we ended up settling out of court and thanks to Daniels efforts he managed to achieve a higher settlement than I expected. Even after Daniel had done his part he still made the extra efforts in chasing the settlement money as quickly as he could, showing he always goes above and beyond.

And lastly, that he would recommend Donoghue Solicitors to anyone:

I could not reccomend him and this firm enough, they are unlike most solicitors who don’t keep you informed and leave your file collecting dust. I am so grateful for all the work Daniel and his team have done on my case. Thank you!