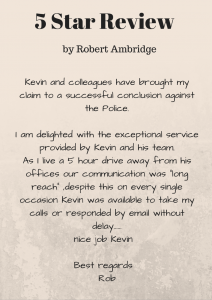 Donoghue Solicitors is a firm of award-winning solicitors who help people throughout England and Wales win their police misconduct claims.

But we can’t do it on our own. Read on to find out what information we need to consider your police misconduct case, then call us on 08000 124 246, or complete the online form on this page to contact us.

Basic Information to Give to our Police Misconduct Solicitors

When you first get in touch with our police misconduct lawyers it helps if you give as much relevant information as possible for two reasons:

Please answer the following questions (taken from our www.policeclaims.co.uk website):

If relevant, also tell us:

How to Answer “What happened?”

Sometimes it can be hard to know where to start when telling someone about police misconduct. We want to make things as easy as possible. If you call us we will guide you with relevant questions. If you prefer to use the online enquiry form don’t feel like you have to write a lot. If we want to know more we’ll ask you.

As well as the questions above, the following suggestions will help you tell us what happened.

If you have a potential false imprisonment claim tell us what you were doing immediately before your involvement with the police, and what was said by both you and the police when you first came into contact with them.

If you think that you were unlawfully searched, what grounds did the police give you (if any) when you were searched?

If you were “booked in” at a police station, what grounds did the arresting officer give to the custody sergeant? Sometimes that information can be different to the reason given immediately on arrest.

How long were you under arrest? Time runs from the moment you were detained, even if you were not physically restrained. (See the false imprisonment page for a full explanation.) If you were arrested, please confirm the dates and times of arrest and release.

Which police station did you go to? Did the police mistreat you at the station? If so, how?

Have you had any contact with the police since? Some people allege a pattern of police harassment so this information, with dates, times, and details of the officers concerned, can help.

Do you have any provable financial losses, such as lost earnings and/or out-of-pocket expenses? (E.g. taxi fare home from the police station after release.)

If you want to claim compensation for police assault, then let us know if the police used weapons (e.g. Taser “stun guns”, batons, fists, police dogs) and what force they used.

If you used any force against the police, what did you do? When? Was anyone else involved? (e.g. the police were breaking up a fight at a pub or called to deal with a domestic disagreement).

What injuries did you suffer? Include handcuff injuries, cuts, bruises etc. Even taking DNA and fingerprints are police assaults if done unlawfully. Tell us if you have any evidence to prove your injuries. E.g. photographs, video, CCTV footage. What are your current injury symptoms?

Tell us about any medical treatment you received. Who provided it? When? E.g. from ambulance paramedics/ hospitals/ walk in centres/ doctors (including at the police station)/ pharmacists etc.

Also, tell us if you were suffering any similar injuries before the alleged police assault (e.g. you had back problems which were made worse).

As with false imprisonment claims, you might also be entitled to compensation for your provable losses, such as lost earnings and other out-of-pocket expenses. In police assault cases these can include travel to/ from medical providers, medication, dressings, damaged clothing, broken mobile phone etc.

Lastly, tell us if you received any care or help from others as a result of the assault (read about third party care by clicking on the link).

What was their reason for the search? If they gave you a written police warrant what does it say?

In trespass to property cases, it’s common for the police to raid people’s homes in “dawn raids”. If so, were you alone? If not, who else was at the property (e.g. family members). Did the police search them too?

Did the police damage the premises on entry? What property was taken or damaged (if any)? Has it been returned/ repaired/ replaced? Did you have to pay anything?

Lastly, did the police admit their mistake and have they made any contact since?

If you were charged, did you accept a caution or formal reprimand?

If you were subject to a criminal prosecution tell us how long it lasted, which court(s) were involved, how often you had to attend, if you gave evidence, and how the prosecution concluded. Were you acquitted, the proceedings discontinued, or did you accept a bind over?

Did the police give evidence in court against you? Did they give inconsistent or false evidence? Did the judge criticise them at the end of the proceedings?

In malicious prosecution cases it is often the case that there is some history between the police and the victim. Tell us if you had any previous dealings with them and if you have any ongoing issues with the police.

Solicitor Director of Donoghue Solicitors, Kevin Donoghue, is a police misconduct solicitor and member of the Police Action Lawyers Group.

What Else Should I Know?

Click on the main actions against the police page or our blog for more information about police misconduct claims (e.g. to find out about the law in breach of the peace cases). In particular, we suggest you read about:

Also, you might want to read some genuine client reviews and why you should use us to find out what makes our actions against the police solicitors different.

Briefly, Donoghue Solicitors is a specialist firm of solicitors who fight for victims of police misconduct. Liverpool Law Society praised us for our work in actions against the police when we won the Niche Law Firm Award at the 2015 Liverpool Law Society Awards. (Read about that and the judges’ comments here.)

Solicitor Director Kevin Donoghue, a nationally-renowned police misconduct solicitor, leads our dedicated team. Kevin is a member of the Police Action Lawyers Group, an organisation of solicitors, barristers, and legal executives, who represent claimants in their actions against the police.

Contact Donoghue Solicitors today by completing the online form on this page. Our website is secured using Trustwave’s 256-bit encryption technology so you can be confident your personal information is safe.

Alternatively, speak to a police misconduct lawyer at Donoghue Solicitors on 08000 124 246. We’re waiting to help with your compensation claim.

Unfortunately, because systems of law are different around the world, we can only accept cases in England and Wales. We suggest people north of the border contact the Law Society of Scotland for help.