I was recently approached by Les Irving, a Bootle, Merseyside resident.

He told me that he was running the London marathon to raise money for the Cystic Fibrosis unit at Alder Hey children’s hospital in Liverpool, where his daughter Phoebe receives treatment.

As physical therapy is so important, the patients are encouraged to exercise. As we all know though, that can often feel like a chore.

Read about how we got round this problem below: 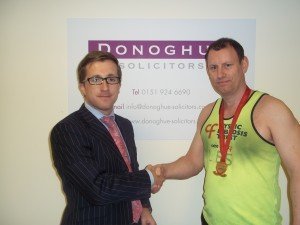 The generous donation was made following a discussion between Solicitor and Principal of the law firm, Kevin Donoghue, and Bootle resident Les Irving.

Mr. Donoghue explains, “cystic fibrosis is a chronic lung disease where thick, sticky mucous builds up in the lungs and digestive tract. Exercise is very important for people with the disease as it helps loosen mucous in the lungs and improves health generally. Les explained to me that sometimes it can be hard to motivate Phoebe and her fellow sufferers in the Unit to take regular exercise, and that he wanted to do something to help make it fun.”

As often happens, technology came to the rescue.

Kevin Donoghue continues, “the Xbox Kinect is a sensor device which attaches to the Xbox 360 video game console. Similar to a webcam, it enables users to control and interact with video games without the need to touch a game controller. Instead, the game player uses full body movement and speech. As games can be involving and exciting, the player does not feel like they are working out, so it’s perfect for reluctant exercisers.”

Les explains, “I discussed the idea with Alder Hey. They liked it but said that they couldn’t afford to pay for such an expensive piece of equipment. I mentioned this to Kevin Donoghue, who readily agreed to donate a brand new Xbox 360 and Kinect if I completed the London Marathon. Thankfully, I did!”

Les is still accepting sponsorship for the marathon via the website www.justgiving.com/les-irving1. Kevin Donoghue, whose firm specialises in accident claims and actions against the police, can be contacted on 0151 924 6690 or at  www.donoghue-solicitors.co.uk.