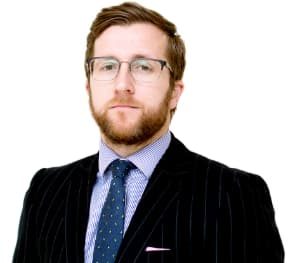 Between 19-21 December 2018 Gatwick Airport was shut down after a drone (or drones) was spotted near the runway. The shutdown caused travel disruption at the UK’s second busiest airport. It affected about 140,000 passengers with delays and cancellations to 1,000 flights.

On Friday 21 December 2018 Sussex Police arrested two people suspected of “the criminal use of drones”. The police arrested them on suspicion of disrupting civil aviation “to endanger or likely to endanger safety of operations or persons”. This is a serious charge which carries a prison sentence if convicted. The police searched the couple’s home and, somehow, the media obtained their details. Commentators such as Piers Morgan called the suspects “clowns”. (He later apologised). Newspapers published stories with inflammatory headlines, including this one: 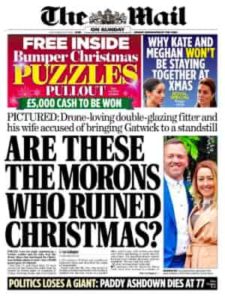 Sussex Police released the suspects without charge 36 hours’ later. The couple, who I am not naming to minimise further distress, feel “completely violated” by the incident, and said:

We are deeply distressed, as are our family and friends, and we are currently receiving medical care. The way we were initially perceived is disgusting, although those that knew us didn’t doubt us for a second.

But Sussex Police defended their actions. Detective Chief Superintendent Jason Tingley said he was “satisfied that the arrest was lawful”:

And he denied responsibility for the media reporting, saying:

“We would not have chosen in any event to provide that information to anyone… and one might say that’s probably hindered us in terms of how quickly we’ve been able to get to a resolution, in terms of them being released from custody.”

The situation remains unresolved and a £60,000 reward is unclaimed.

What about the couple who were wrongly accused of criminal wrongdoing at Gatwick Airport? Can they claim compensation? As a solicitor who specialises in civil actions against the police, I can offer some insight. But I stress that I base my comments on media reports. I have not spoken with the couple. As a starting point, we should consider the following:

1. Were the arrests lawful?

Sussex Police were under huge pressure to solve this crime quickly. The disruption and worldwide publicity were immense. It seems that they were desperate to report progress, issuing a report about the arrests on the Force website at 1.23 a.m. on Saturday 22 December.

But did public and political pressure justify arresting the two people involved?

In most civil compensation claims the claimant must prove their case against the defendant. But civil actions against the police are different. Once the claimant has proven that they were detained, the police must justify it. We do not know on what grounds DCS Tingley said he was “satisfied that the arrest was lawful”. But to prove a lawful arrest (without a warrant) the police must satisfy all of the following conditions in ss.24 & 28 of the Police and Criminal Evidence Act 1984 (PACE) (as amended), which are:

(iii) the arresting officer’s reasons for effecting an arrest amount to a reasonable belief that the arrest was necessary, usually to allow the prompt and effective investigation of the offence or of the conduct of the person in question (“the necessity test”)

(v) the arresting officer’s exercise of his or her discretion to arrest was reasonable in public law terms because PACE confers a discretion, not a duty to arrest. (“the Wednesbury test”).

You can read more about false imprisonment here.

The PACE conditions raise questions which the arresting officer might have to answer to justify the arrests. I understand from a drone enthusiast that the police might have found the couple by searching social media. If so, did that information give the arresting officer enough to form a reasonable and honestly held suspicion that they were involved in the commission of a criminal offence? Even with that intelligence, and any other information, could the police have handled the interview and search process differently? As my client James Parry’s case proved, the police always have the option of inviting suspects to attend a voluntary interview instead of arresting them (condition iii).

Public and political pressure is not mentioned in the PACE rules on lawful arrest. The urge to solve a crime does not justify arrest in any circumstances.

Sussex Police arrested the suspects just after 10pm on Friday 21 December. The police held them for 36 hours over two nights until release at about 10am on Sunday 23 December.

The police must justify continuing detention on a minute-by-minute basis. As Lord Donaldson explained in Mercer v Chief Constable of Lancashire Constabulary:

what may originally have been a lawful detention may become unlawful because of its duration or of a failure to comply with the complex provisions of the Police and Criminal Evidence Act 1984.

PACE sets detention periods, which are generally 24 hours, but up to 36 hours when authorised by a superintendent (or above). (Court warrants can authorise further extensions, up to 96 hours.) The superintendent or above must have reasonable grounds for believing that:

Knowing this, and especially point 3, it is interesting to note what the male suspect’s employer said about an alibi. He explained:

“All it would have taken was for them to call me and contact me as his employer and I could have confirmed that all day Wednesday and half the day Thursday, he was part of a three-man team installing fascia, soffit and guttering at a client’s home in Groombridge, Kent.

“On Friday he spent most of the day running my daughter about because she damaged one of her toes and he was ferrying her to the doctor.”

[He] went on: “I discovered on Friday evening that he had been arrested. I got onto the police on Saturday evening, but I couldn’t get through to anybody.

“There was was just somebody who said I’ll take notes and pass that message on. But they never did get back to me, there was no return contact.”

Police took 67 statements. But did they prioritise effectively knowing that they had two people in detention? The male suspect’s boss called to confirm a solid alibi. Given the need to justify detention and high-profile nature of the matter, why was this call effectively ignored? Would a superintendent (or higher officer) have authorised continued detention knowing this?

defended the decision to hold [the male suspect] for an extended period, despite his employer saying he was at work during the drone flights.

He added: “I’m really sorry for what [the male suspect] has experienced and the feeling of violation around it.

“[But] what might have been worse as an experience for him would have been to be released under investigation still.

“We were able to exhaust all our lines of inquiry on that first instance and were able to release him from police custody saying he was no longer a suspect.”

It’s not clear what the Chief Constable means here. One interpretation could be that the couple was detained for longer than necessary while the police exhausted their enquiries. If that’s the case, did the police consider releasing them on bail (s.30A of PACE) with conditions if necessary?:

(a)to secure that the person surrenders to custody,

(b)to secure that the person does not commit an offence while on bail,

(c)to secure that the person does not interfere with witnesses or otherwise obstruct the course of justice, whether in relation to himself or any other person, or

Again, given the police’s obligation to justify detention, officers may need to explain why they did not release the couple earlier, with or without bail.

As my client Nigel Lang explained, arrest publicity can have life-changing consequences. It erodes the presumption of innocence until proven guilty. Did police leak details of the arrest? Good Morning Britain host Piers Morgan seemed to think so:

Press assumed it because police assumed it & leaked accordingly. The true culprits may be far more worrying, as this tweet suggests. https://t.co/BejKDjkVmL

As I mentioned earlier, the police were coming under intense scrutiny at the time. It is conceivable that an officer leaked the suspects’ details to show Sussex Police had the situation under control.

If so, they caused the couple a great deal of unnecessary pain and distress.

The two suspects describe the life-changing trauma of their arrest and detention in this video. They are now receiving medical treatment.

It remains to be seen if the couple takes legal action. Proving wrongful arrest is not easy. Ignore what uninformed people say on social media. A police officer can be completely mistaken (e.g. relying on a mistaken identification given by a witness) and the arrest can still be lawful.

And some have suggested that the couple will get “millions”, referring to Sir Cliff Richard’s case as an example. They’re wrong. As I explained here, his was an exceptional case.

Despite these warnings, as my client Paul Smith proved, successfully suing Sussex Police is possible. The couple might be able to bring compensation claims for

This may lead to compensation for

As well as the financial aspect, there are also public confidence consequences for Sussex Police. They come out of this matter with very little credit. DCS Tingley confused the public and media on 23 December (the same day the couple were released) when he said that there was

‘always a possibility that there may not have been any genuine drone activity in the first place.’

(The following day the police called this “poor communications” and claimed there had been many drone sightings.)

DCS Tingley may have also contributed to the arrested couple’s trauma when he refused to apologise.

Lastly, the incident may encourage MPs to legislate. Parliament might

I wish the couple all the best as they start the New Year and come to terms with everything they’ve been through. They deserve it.