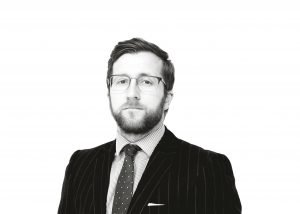 Kevin Donoghue, solicitor, explains how the police barred list works and what you should know about it.

When police officers are dismissed for gross misconduct their victims often express relief. They think that the officers will:

But, in many cases, neither of these things are true. Here I show that there are ways for disgraced former officers to:

people who have been dismissed from policing through the Police Conduct and Performance Regulations.

The following people can have their details added to the Barred list:

Once added, they are not eligible for employment by:

The barred list is maintained by the College of Policing, which describes itself as:

a professional body for everyone working across policing. It is an operationally independent arm’s-length body of the Home Office.

a list of all officers, special constables and staff members who have resigned or retired during an investigation or who leave before an allegation comes to light. It also includes designated volunteers who have had their designated status withdrawn because of conduct or performance matters.

Section 88I of the Policing and Crime Act 2017 allows for:

to have their details added to the advisory list.

What you should know about the barred and advisory lists

You can search the public barred list here. But you might be wasting your time because there are many exceptions.

These exceptions mean that the College of Policing’s “Search the barred list” website page is lacking, perhaps on purpose: 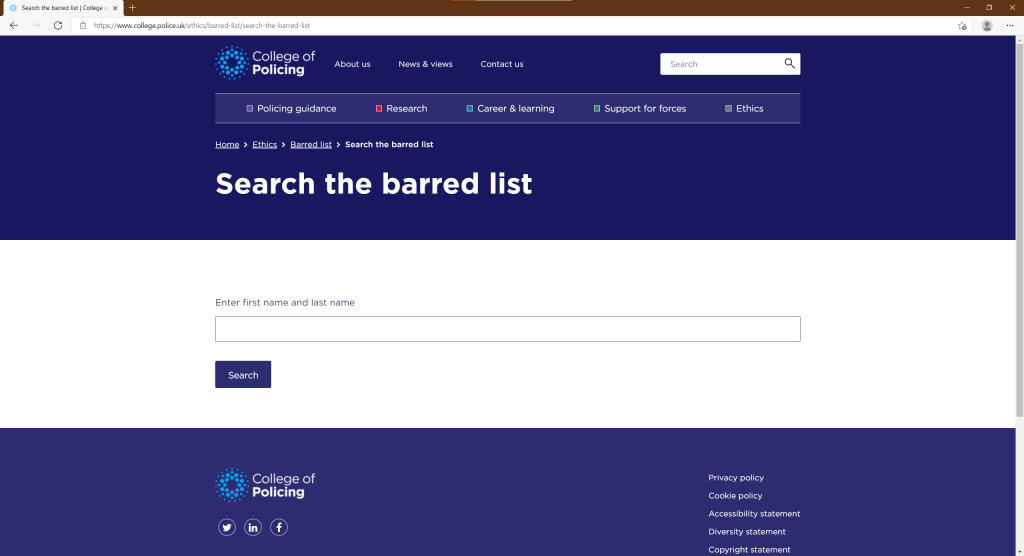 The barred list is incomplete, but at least we can see it.

This means that former police staff can avoid having their details made public by resigning or retiring at any time before disciplinary proceedings are brought or concluded.

Misconduct proceedings take time to investigate, prepare, and deal with. I have represented clients in civil actions against the police for over 20 years. In my experience, officers frequently quit before disciplinary and misconduct hearings. That way they avoid appearing on the publicly-searchable barred list.

Former police officers who are dismissed after a misconduct hearing can ask for anonymity when their details are added to the lists.

As this report in The Guardian shows, an officer who was found guilty of gross misconduct for racist comments:

would have been dismissed had he not resigned from the force.

The officer did not bother to attend the hearing. Instead, he:

instructed his Police Federation representative, Moray Anderson, to say the proceedings infringed his right to a private life under article eight of the Human Rights Act.

Anderson asked for Sgt X not to be named on the barred list to avoid the “public shame” this would lead to.

The Disciplinary Panel was swayed despite its serious finding and the former officer’s apparent contempt for the proceedings. Sergeant X was granted anonymity and his details will be kept private by the College of Policing.

4. Removal from the barred and advisory lists

This can happen in three ways:

Regulation 8 of The Police Barred list and Police Advisory list Regulations 2017 says that certain people must have their details removed from the barred list automatically if:

b)     Automatic removal of details from the advisory list

Former officers who resigned or retired before dismissal will get their details removed automatically from the advisory list if:

c)     Discretionary removal of details from the barred and advisory lists

Former officers, special constables, PCSOs,  and police staff can apply to the College of Policing to have their names removed from the barred list after:

(The time period is five years for those on the advisory list.)

The removal process is flawed because the College of Policing:

will not review the reasons for the original dismissal, and will only consider whether it is proportionate for the individual to remain on the barred list.

Instead, the College of Policing says the process involves:

Perhaps understandably, some journalists reporting on policing issues do not seem to know how the barred and advisory lists work. Neither do the police, which is less forgivable.

For example, as this news report wrongly says:

A former West Midlands Police worker who was convicted of conspiring to supply drugs while off duty will never work in policing again, the force has said.

In that case Cherelle Ying, a former West Midlands Police officer, was convicted of conspiring to supply drugs. She resigned before being fired for gross misconduct. Her details were added to “a barred list” (which was probably the advisory list). The article’s writer said:

West Midlands Police confirmed she has also been placed on a barred list – meaning she will be unable to work in policing again.

I expect the reporter was quoting West Midlands Police’s own write-up, which says:

Ying resigned from the force in February this year ahead of a disciplinary panel on 8 April which found that Ying’s action amounted to gross misconduct and, had she not resigned, she would have been dismissed. She has also been placed on a barred list meaning she will be unable to work in policing again.

While it is very unlikely that Ms Ying will be re-admitted to the police, it is not an absolute as stated above. She could get back in if she can convince the College of Policing review panel and pass force vetting procedures.

Consequences for the public

These days, most companies conduct due diligence before hiring former police and staff. This includes internet searches. But they only work if the applicant’s misdeeds are published online.

Some police officers and staff get anonymity in disciplinary and misconduct hearings. And the failings of the barred and advisory lists mean that they can easily avoid negative publicity. Their reputations and employment prospects are unharmed.

Contrast that with people whose details are added to the Disclosure and Barring Service. As our clients Lisa McCullough and James Williams found, even the threat of being added to the DBS check list was frightening because it could end their careers in disgrace.

Eventually, some former officers and staff will get another police job. The government is committed to hiring 20,000 new officers by 2023. Recruiting is hard. Forces are under pressure to meet the target.

A former officer who convinces the College of Policing to remove their details from the barred or advisory lists would probably have better prospects than a rookie. All they need to do is wait out the three (or five) year period before applying. Because the Regulations took effect on 15 December 2017, some may have already done so.

The fact that former officers found guilty of gross misconduct can get back into policing means It is only a matter of time before their victims might see them in a uniform again. Situations like the one my colleague Daniel Fitzsimmons described here (Should a Criminal Conviction Prevent a Police Officer From Serving?) are even more likely.

The trauma for victims of police misconduct could be devastating.

And the failings of the barred and advisory lists undermine public confidence in the police.

Kevin Donoghue is the solicitor director of Donoghue Solicitors. Contact him here.