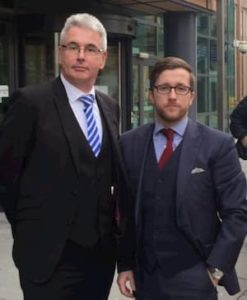 Last week my client, Liverpool solicitor James Parry, was awarded £9,000 compensation in his false imprisonment claim against Merseyside Police. You can read about the case at The Liverpool Echo and The Law Society Gazette websites.

These press reports included a statement from Merseyside Police. As a solicitor who specialises in civil actions against the police I am concerned that the quote provided by Merseyside Police appears to mis-state the burden of proof in false imprisonment cases. This may give the wrong impression about our legal rights resulting in Claimants and inexperienced lawyers abandoning genuine claims once they receive the police’s denial of liability.

As a result, innocent people could be left with the distress, upset, and lifelong humiliation of an arrest. For some, this could have devastating consequences on their personal and professional lives. In this blog post I’ll clarify the law on the burden of proof and the consequences of getting it wrong.

On Thursday 10 December 2015 HHJ Parker sitting at Liverpool County Court entered judgment for my client, James Parry (details used with permission), after finding that a Detective Constable from Merseyside Police unlawfully arrested and detained him (a.k.a. false imprisonment).

Both The Law Society Gazette and Liverpool Echo reported the story and asked Merseyside Police for a comment.

I was concerned when they issued a statement saying: “The force carefully considered this civil action and it was thoroughly examined by our legal department who also sought external legal advice. As a result, it was decided that it was appropriate to defend the claim and test the facts in court.” (my emphasis in bold)

This statement seems to suggest that Merseyside Police are dealing with civil claims for false imprisonment under the mistaken impression that it is for the Claimant to discharge the burden of proof and justify arrest.

In fact, once the Claimant has proved confinement, which in most cases is not in dispute, the burden of proof shifts to the Defendant to justify it. The legal position is as follows.

The Law in False Imprisonment Cases

False imprisonment is defined as the “complete deprivation of liberty for any time, however short, without lawful cause”. (See Clerk and Lindsell on Torts, 19th edition, 2006, 15-23.)

It is established on proof of:

The Claimant must prove the first limb (that they were imprisoned) but once he or she has done this, the onus then lies on the Defendant to prove the second limb (justification). (This was established in Hicks v Faulkner (1881).)

As a result, the burden of proof is quickly shifted to the Defendant and, as stated in Liversidge v Anderson (1942), every imprisonment is prima facie unlawful.

There is no minimum period of detention for a claim to succeed although the length of detention has a bearing on the level of damages.

False imprisonment is actionable per se. That is, it’s not necessary for the individual to have suffered any damage or for them to be even aware of their false imprisonment. (See Murray v Ministry of Defence (1998).)

In Mr Parry’s case against Merseyside Police, there could be no doubt that his confinement was total. He was arrested and detained for over five hours. This was not in dispute, so Mr Parry had satisfied the first limb before the case got to Court.

So the burden of proof at the trial was entirely on the police. It appears that the person who provided the statement to the press was unaware of this fact and the effect of the two-stage test established over 130 years ago.

Fortunately, the Judge who heard the case was under no such misapprehension.

The most common defence to discharge the burden of proof is that the Defendant police force (through the arresting police officer) was carrying out a lawful arrest.

Sections 24 and 28 of the Police and Criminal Evidence Act 1984 (as amended) show that the following conditions for a lawful arrest are necessary:

Necessity for arrest (condition 3) was the central point in dispute in Mr Parry’s case against Merseyside Police. An officer arrested him despite my client attending by prior appointment for a voluntary interview at a police station.

The arresting officer explained to the Court that he formed a view that it was necessary to arrest James Parry when he reviewed the evidence in August 2010, prior to making contact on 6 September. He said that he wanted to make sure that he had a degree of control and, with no knowledge of Mr Parry, was compelled to arrest him.

It appears that the Detective Constable failed to appreciate that he did not have to make an arrest to have the control he wanted and that at any point during the interview process he could have taken that step.

The Judge found that the arresting officer failed to direct his mind to the question of necessity for arrest. If he had done so, he would have concluded that it was not necessary.

The Cost to the Public

But he does not bear sole responsibility for this matter. If the police’s statement to the press is taken as written, Merseyside Police’s lawyers seem to misunderstand the law as well.

Instead of accepting responsibility, the force’s legal team sought to “test the facts at court”, a decision which will directly cost the police £9,000 in damages, plus combined legal costs for both sides of well in excess of £100,000.

With considerable budget cuts over recent years Merseyside Police and the tax-paying public can ill-afford to get this wrong.

If you want to claim compensation for false imprisonment contact Donoghue Solicitors, on 0151 236 1336, or fill out the form on this page.