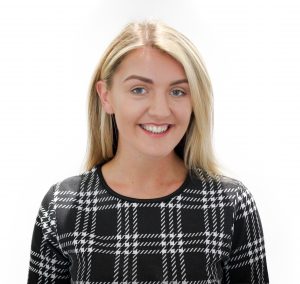 I’m scared of heights. Even standing on a ladder frightens me. So, why am I going to make a parachute jump out of a plane at 15,000 feet? Because Heidi Roberts needs help.

What Happened to Heidi Roberts?

Heidi is a family friend with breast and lung cancer. She’s only 36 but has already been through so much. After developing aggressive breast cancer in 2011 she had chemotherapy. Sadly, it failed and the cancer spread to her lungs. Heidi, who had to leave her job as an intensive care nurse, tried everything, including clinical trials. But after four years of treatment doctors told her there was nothing else they could do. She has recently been told that she has months to live.

Determined to beat this terrible disease, Heidi and her husband Paul researched alternative therapies. After countless hours they found Hallwang Private Oncology Clinic in Germany which offers PD-1 immunotherapy, a form of treatment with a good success rate. Unfortunately, this treatment is not available in the UK and has to be paid for privately.

To get started the clinic needs an initial payment of £50,000. Heidi’s family and friends rallied round and began raising money to fund the treatment. They set up a gofundme page and organised sponsored head-shaves and other events. After only a few months they had raised about £12,000. I offered to help and somehow (I still don’t know how!) agreed to sign up for a sponsored parachute jump. Earlier this month I set up a justgiving page and invited sponsors to support me.

After I signed up for the parachute jump the media learned about Heidi’s plight. She appeared on ITV’s Granada Reports and donations flooded in from all over the world. Thanks to the public’s generosity this genuine, lovely woman, has raised the £50,000 needed for her initial treatment.

So, am I backing out? No way! On 25th September, I am going to Lancaster to make the parachute jump to help Heidi pay for travel, accommodation, and any future treatment. The £50,000 raised so far means she can start treatment in Germany but Heidi and her husband Paul still need to get there and have somewhere to stay.

Anyway, I have sponsors expecting me to go through with it, so couldn’t back out even if I wanted to. And compared to the bravery Heidi has shown, jumping out of a plane and falling to the ground at 120mph is nothing!

If you want to help me raise money for Heidi please sponsor me at: https://www.justgiving.com/crowdfunding/hannah-bickley. Thank you.

Update- I did it!

I’m proud to say that I successfully jumped from a plane on Sunday. Here’s the proof: 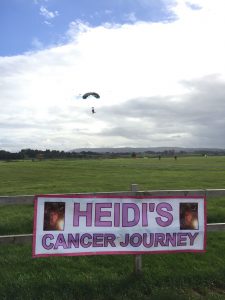 Hannah Bickley coming in to land. 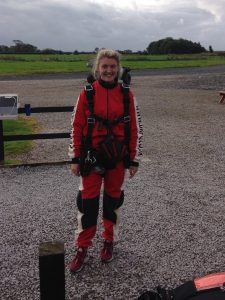 A relieved Hannah Bickley after her parachute jump. 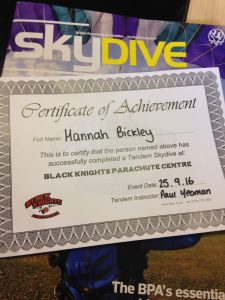 And thanks to many generous donations, some of which did not go on the justgiving website, I beat my goal of raising £400 for Heidi Roberts. Thank you to everyone who sponsored me and helped me make the parachute jump. It was an amazing experience for a very worthy cause.