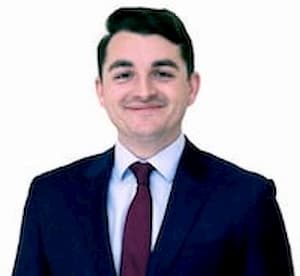 Knife crime is a serious problem. The police are right to highlight this and seek harsh punishment for offenders. But what about when it involves one of their own?  Then, as two of my clients have found, things aren’t quite so straightforward. Read on and ask yourself if the police’s conduct reveals double standards.

I represent “John” and “Sarah” (names changed as their case is ongoing), a married couple. One night they got into a petty argument. Voices were raised. Their daughter got scared and called the police.

Officers came to the family’s home and demanded that John let them in. He refused, believing that the police had no right of access.

But the police insisted. (I understand that the officers claim they were relying on s.17 Police and Criminal Evidence Act. They argue that they were “saving life or limb or preventing serious damage to property”. But, in my opinion, this legal basis doesn’t fit the facts, so making what happened next unlawful.)

The police forced their way into the house, wrestling John to the ground. He continued to protest and resist, sure that he had done nothing wrong and that the police had no right to be in his home. After a struggle officers arrested and handcuffed John, injuring him in the process. They took him to a police car and drove John to the police station. John was “booked in” and, to his amazement, told he was being held for assaulting a police officer in the execution of his duty. In interview John insisted that he had done no such thing. The police charged and bailed him. John pleaded not guilty. His case went all the way to trial, where he was acquitted.

John knew that the police’s case was unfounded, and that the prosecution was wrong. He was sure he had the right to defend himself. John felt mistreated and contacted me because my firm specialises in helping people with civil actions against the police.

John told me his story. I listened as he explained that not only had the police forced their way into his home, but that they had injured him during arrest. He described deep, sharp, cuts to his arms which needed medical treatment. He saw his GP the day after the arrest and told the doctor what had happened. John’s GP didn’t think the cuts were from handcuffs: he thought they were from a bladed object.

A couple of days after the incident the family came across a multi-tool, or “Swiss army”, knife in their home.

It had a name engraved on the back.

It was one of the police officers.

I agreed to help John and Sarah bring a formal complaint against the police. John gave me the multi-tool for safe-keeping.

Recently, I spoke with an investigator at the police force’s Professional Standards Department. This police officer’s job is to impartially investigate the complaint. At the end of the investigation he should prepare a report showing his findings and recommendations. Police officers may be cleared of any wrongdoing at the end of this process. If not, and depending on the circumstances, proposals for how to deal with any adverse findings can include

Professional Standards investigators have a crucial role in maintaining public confidence. They “police the police”.

Sadly, I do not have confidence in the way this investigator is handling John and Sarah’s complaint because:

Local resolution is the least formal process for dealing with police complaints. It is unsuitable given the facts because it cannot result in misconduct or criminal proceedings.

John and Sarah’s case is unusual in that it is not a “he said, she said” case, where police officers normally have the advantage. The facts have already been tested in a criminal court. John was cleared of the serious charge of assaulting a police officer after reviewing sworn evidence from both sides.

But questions remain about whether the police acted improperly by

The investigator was aware that an officer’s Swiss army (multi-tool) knife had been left at the family’s home. He also knew from the police complaint that John alleged he had been cut during the arrest. The multi-tool device left at John and Sarah’s home is a “Gerber Dime”. This is it: 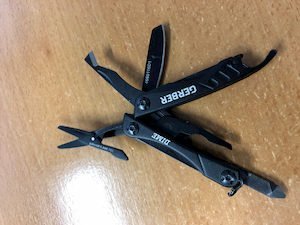 This is the multi-tool found at our client’s home following a police visit.

Gerber sell similar tools for £29.99 plus shipping in the UK, with personalised engraving available for £3.99.

As you can see from this youtube video, it’s a versatile tool which has two blades; a regular “fine edge” blade and a retail package opener:

Now look at these photographs of John’s arms. 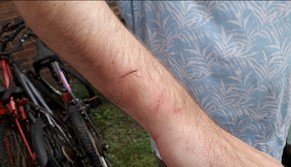 Photo of our client’s forearm (used with his kind permission). Note where the cuts appear. 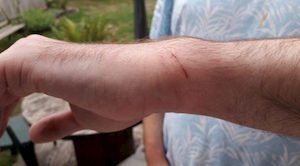 Was his GP right in thinking that the cuts were caused by a bladed object? Did one of the multi-tool’s knife blades cause John’s wounds?

what other rational explanation is there for how John was injured?

If the police officer used the knife blade to assault John during the arrest, he could be facing serious misconduct and criminal charges.

Even if that is not proven, is it right that a police officer should take a multi-tool to a domestic house call? They are not standard kit for police officers. Why would the officer think it was appropriate to “go equipped” on the job?

I told the PSD investigator about my concerns and that this matter is not suitable for local resolution.

Are police double standards exposed if an officer uses a multi-tool knife like this during an arrest?

He then raised another troubling issue.

the investigator simply said that the officer wanted it back.

Does this reveal double standards in how the force deals with police complaints? Look at it this way: if it was alleged that my client had used a multi-tool knife on an officer he would not get it back before the conclusion of criminal proceedings. And the charges he faced would be more serious than those John fought at court, in which the prosecution claimed he assaulted a police officer in the execution of his duty. That alone is “aggravated” assault and can result in six month’s jail time and a hefty fine. Using a knife would have led to more serious charges and made a possible conviction far worse.

Is it right that the police’s investigator tried to recover this crucial piece of evidence and return it to his colleague?

I told the investigator that I had the knife and would keep hold of it. In doing so, I am fulfilling my legal duty to preserve evidence. I am worried that this crucial piece of evidence might mysteriously disappear if I returned it now.

And, given what I now know, I am not confident this complaint against the police will be fairly investigated. As I see it, the police’s double standards have been exposed. My clients know my views and are prepared to bring civil court proceedings if justified and necessary. We await the outcome of the Professional Standards Department’s investigation with interest.

Daniel Fitzsimmons is a Chartered Legal Executive who specialises in civil actions against the police. Contact him here.