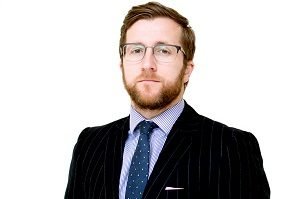 Kevin Donoghue, solicitor and specialist in civil actions against the police.

“You’re brave, coming into the lion’s den,” said the Police Federation representative. “I know,” I replied, “but it’s worth it.”

This was one of the conversations I had at the Police Federation Post Incident Procedure conference on 15-16 October. There I met police officers, representatives of the Independent Office for Police Conduct, medical experts, lawyers, and others.

I was never going to win a popularity award at the conference. Some of the delegates might consider me “the enemy” because I am a solicitor who represents victims of police misconduct in their civil actions against the police. I was not paid for being there. I travelled down to Leicestershire the night before to make sure I could attend. I missed a day’s work, coaching my under-9s football team, and time away from my young family. So why did I go? 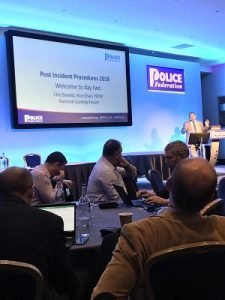 Che Donald, Vice-Chair of the Police Federation of England and Wales, presenting at the post-incident procedure conference in October 2018.

Che Donald, the outgoing Vice-Chair of the Police Federation of England and Wales (PFEW), invited me to appear at the conference. He contacted me because Sgt Donald and I have sparred in the media over the police’s use of spit hoods. (He’s supportive of their use. I’m concerned by their unchecked roll-out, as you can tell from my earlier blog posts.)

This PFEW conference focused on post-incident procedures. These are the rules the police must follow after a death or serious injury. I joined a panel discussing police restraint procedures. Members included:

As you can tell, the panel leaned heavily in favour of the police. I was outnumbered. Despite this, I was treated respectfully and well during the hour-long discussion. It was unscripted, save for questions from the moderator, Phil Matthews.

The audience asked probing questions and brought out some useful points about restraint. These included:

All too often we exist in our own bubbles. The panel debate meant that the Police Federation audience heard all sides about current police restraint issues. My input helped the police understand the perspective of misconduct victims and their solicitors. And I got to hear their views, which will benefit me and my clients. I stand up for police misconduct victims in my role as a solicitor. I am glad I went to the conference to speak on their behalf.

Kevin Donoghue is the solicitor director of Donoghue Solicitors.