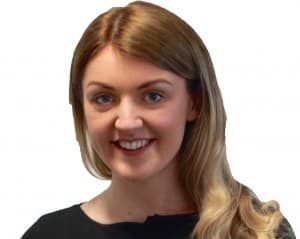 Pre-medical offer whiplash claims are often settled quickly and, for the insurers, cheaply. But should you accept a pre-medical offer or reject it and pursue full compensation? Here’s my view.

My colleague Daniel Fitzsimmons has discussed how a pre-medical offer works in an earlier blog post. He’s right to point out that it’s usually a mistake to accept a pre-medical offer, especially in claims involving “whiplash” injuries where the innocent claimant suffers neck and/ or back strain in road accidents.

This is because personal injury claims are as varied as the people who make them.

Despite this, insurers have woken up to the fact that some people are willing to settle their claims at a substantial discount in return for a quick settlement. They usually offer a fixed amount, which wrongly suggests that all whiplash claims are the same. The saying “a bird in the hand is worth two in the bush” springs to mind, especially if you choose to settle your claim without a medical report.

But should you take their low-ball offer? As my client David Hoang found out, with only a small amount of extra time and effort the claimant who rejects a pre-medical offer whiplash settlement can be properly compensated.

David Hoang (details used with permission) is a 29-year old office worker. In April this year he was driving to a restaurant. On his way he saw an ambulance approaching with its lights flashing. He pulled over onto the kerb to let the ambulance pass. Suddenly another car came round the corner and hit Mr. Hoang’s car in the rear.

Thankfully the other driver behaved responsibly, stopped at the scene, and accepted the blame.

David’s car was written off in the crash and dealt with by his own insurers. But he suffered whiplash to the neck and went to a walk in centre for attention.

He came in to our offices to see me and we started the claim.

As I am required to do, I submitted Mr. Hoang’s claim via the personal injury claims portal.

Within a week the responsible driver’s insurers admitted blame and made a pre-medical offer of £1200 for everything, including whiplash and out-of-pocket expenses.

Mr. Hoang considered the offer, and the speed he received it, but rejected it on my advice.

I advised him that without a proper medical expert assessment, there was no way of knowing if this offer was acceptable. By taking “the bird in the hand” he may under-settling his claim and losing out significantly.

We discussed the procedure to correctly value his claim. I explained that he would have to be medically examined, but that this would not take long and could be arranged close to home. We would also need to correctly prepare his claim for injuries and other expenses, and he would need to keep in touch while I prepared his claim and negotiated on his behalf.

While this would also take some time, he agreed with me that this small amount of inconvenience was potentially worth it. He was entitled by law to full and proper compensation. Now I had to deliver.

Benefit of Rejecting a Pre-Medical Offer

I arranged for an expert doctor who specialises in musculoskeletal medicine to examine Mr. Hoang. The appointment took place only five miles from his home.

The doctor’s report confirmed that David had suffered a neck injury which he anticipated would take 8-12 months to recover. He also suffered from travel anxiety which would go away over roughly the same period.

As well as his personal injury claim David had a modest (£7.50) claim for out-of-pocket expenses.

Once Mr. Hoang had approved the medical report and claim for expenses I submitted the evidence to the insurers with my offer to settle.

I kept in touch with David throughout and advised him at every stage. Although he lives locally, we used email and phone calls most of the time.

Negotiations took six weeks, during which time I made the insurers come up from their pre-medical offer of £1200 to £2457.50, more than double the original offer.

Mr. Hoang’s claim took just over 5 months start to finish. Do you think it was worth his while to reject the pre-medical offer whiplash settlement and seek full compensation?

I do. The numbers speak for themselves.

I’m glad I was able to get David the compensation he rightly deserved. He was very happy and sent a beautiful gift box full of goodies to the office with a very kind note. Here I am planning what to enjoy next: 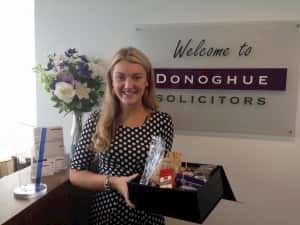 Hannah Bickley with a gift box from a grateful client following settlement of his accident claim.

Although I was just doing my job, it’s always nice to be appreciated. Thank you David!

Hannah Bickley is a GCILEx litigation executive at Donoghue Solicitors. She specialises in accident claims. Instruct her by completing the online form on this page or call 0151 236 1336.