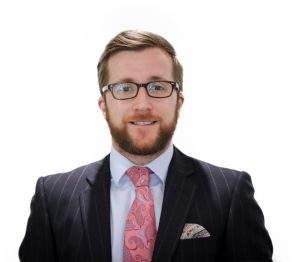 The Scene: a member of the Police Federation goes into a hardware store and approaches a sales assistant.

Police Federation Member: Where can I find the earth moving implements?

Sales Assistant: (Blank look) I’m sorry. What was that?

Police Federation Member: (condescendingly) Listen, I have to move earth in my garden. You sell implements with a handle at one end and a flat blade at the other to let me do that. Now be a good man and tell me where I can find them.

Sales Assistant: (thinks) A handle at one end and a flat blade at the other… I know! It’s a spade! You want to buy a spade!

I recently took part in a debate on BBC Radio 5Live about spit hoods. (A spit hood is a mesh fabric hood which the police put over a person’s whole head to prevent spitting or biting.) Listen to the interview on BBC iPlayer (at 2 hours 47 minutes) or here:

In the well-mannered and lively discussion, Che Donald, Police Federation representative and serving Police Sergeant with Sussex Police, put forward the police’s point-of-view. One of the first things he did was correct presenter Eleanor Oldroyd when she used the term spit hoods, insisting that they be referred to as “spit guards”. This struck me as interesting, particularly as the term “spit hoods” is widely used, and understood, by the police and public alike. Essex Police Federation Chairman Mark Smith refers to them as “spit hoods”, as do forces including Surrey Police and British Transport Police, and the media such as the BBC.

Sergeant Donald is not the only one to use the term “spit guards”. The Metropolitan Police reports on its website that it is presently consulting on “a pilot for the use of spit guards in a small number of custody suites.” (my emphasis)

“The Centre for Public Safety” also refers to spit hoods as “spit guards”, as did London Assembly Member Jennette Arnold OBE when she questioned Sir Bernard Hogan-Howe, Commissioner of the Metropolitan Police.

So what, you may ask? Well, words matter. What we call things affects how we think of them. This is especially important when considering these potentially lethal tools.

Why Spit Hoods Are Being Discussed

A third of all police forces in the UK now use spit hoods. Some, including Mr Donald’s Sussex Police, have been using them for years. But the deployment of “spit guards” became well-known when our biggest Force, the Metropolitan Police, recently changed its mind about using them after a public outcry.

Despite the controversy the police officer’s union, the Police Federation, is keen to see spit hoods extended to all forces. They want us to think of “spit guards” as benign tools which, as I previously discussed in this blog post, help police officers avoid injury and assist in safe policing. But are they really safe?

How the Police Use Spit Hoods

If you’ve never seen a spit hood in action watch this video to see how British Transport Police use them (warning: contains strong language and distressing scenes):

You will see how the police pinned 20-year-old IK Aihie to the ground before putting the so-called “spit guard” over his head. Mr Aihie is clearly struggling. Many onlookers, including his girlfriend, seem upset.

British Transport Police claimed that IK threatened to spit at the officers. A witness said “I didn’t see him spit and I was so close.” His girlfriend made a police complaint about the incident for what she described as “excessive and unwarranted” force.

Why “Spit Guards” Are Dangerous

Spit guard fabric is breathable unless it becomes impermeable, usually with spit, mucus, blood, and/or vomit. Consequently, suffocation is a real risk, and police officers who use spit hoods must take appropriate precautions. Surrey Police’s “Use of Force and Work Equipment Procedure” says:

Spithoods may be used where a person threatens or attempts to spit at or has spat at officers or members of police staff. The hoods are made of a fine flexible mesh material which while allowing the detainee to breath freely prevents the majority of the spit passing through. Subject must be handcuffed to the rear before spithood is used to prevent self removal.

Officers must be aware at all times of how spithoods can appear to members of the public, and that pictures taken of them in use could undermine public confidence.  Caution should be exercised when deploying spithoods in the public arena.  Officers must be aware of their obligations under Article 3 of the HRA relating to inhuman and degrading treatment, hence spithoods should only be deployed when absolutely necessary.

Where possible, remove any facial jewellery and eye wear prior to application. Place over head of subject ensuring it is not restricting breathing or tight on the throat. Any subject who has had a spithood placed upon them must be supervised at all times. Spithoods are not to be used if the subject is having difficulty breathing, vomiting, or bleeding profusely from the mouth or nose.

Spithoods must be disposed of as a bio hazard. Replacement spithoods are available from custody suites.

Note that the detained person must be handcuffed to the rear before the spit hood is applied. While this is standard procedure to prevent hood removal, it also means that the wearer can’t adjust the hood if it becomes impermeable. The requirements that the subject remain constantly supervised, and that they are not hooded if they are having difficulties, are sensible and appropriate. All police forces should use them. Sadly, these common-sense rules are not always followed, sometimes with tragic results. 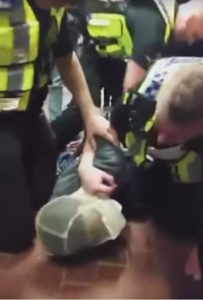 At the police station he was restrained in a cell, strip searched and then left face down on a mattress which had been placed on the cell floor.

Within minutes Mr Pluck was observed from outside the cell and was clearly unwell. Officers entered the cell and attempts were made to resuscitate him. Paramedics were called and he was taken back to Peterborough District Hospital where he was pronounced dead at 6.38pm.

Police in the USA use spit hoods extensively, with similarly devastating consequences.

“[Officers] … placed a spit mask on the face of [Marden] thereby constricting his ability to breathe despite observing and hearing Jack Marden state that he was having difficulty breathing … causing plaintiff’s decedent to asphyxiate and suffer cardiac arrest.”

As the lawyers pointed out, Mr Marden was resisting simply because he couldn’t breathe, drily noting that this is something which “usually causes people to be very agitated”.

After being sprayed Mr Jones was spit-hooded and left alone in a seclusion cell. He complained that he couldn’t breathe. After an 8-minute interval the police found him unconscious. When they removed the spit hood, “vomit spilled out”. Mr Jones died as a result of asphyxiation.

Police covered his head with a “spit mask” to prevent being contaminated by the fluids. One of the other inmates said he heard Daniel say:

He suffocated and died strapped in the chair with the “spit guard” covering his head.

Sussex Police’s Use of Spit Hoods

Michael David Jones’ and Daniel Linsinbigler’s cases have worrying echoes with that of my client Paul Smith (details used with permission). Paul was unlawfully arrested by Sussex Police after a minor traffic violation escalated when the arresting officer mishandled the situation. An officer pepper sprayed Paul during the struggle to take him to the ground face-first,

The pepper spray made it difficult for Mr Smith to breathe. He reflexively tried to spit out the foul-tasting liquid. The arresting officer (wrongly) interpreted this as an attempt to spit at him and officers put a spit hood over Paul’s head.

The (supposedly safe) spit “guard” deprived Paul of the cool, fresh air he craved and heightened his sense of panic. As children we are taught not to put plastic bags over our heads because they prevent breathing. And yet, this was the risk the police took when they sprayed, hooded, and held Paul face-down on the ground. In this position Mr Smith had no alternative but to breathe in the painful PAVA liquid which was on his face. This naturally led to more spitting and mucus, limiting the flow of air through the mesh hood.

Fortunately for Paul he did not suffocate, but the experience was painful, distressing, and humiliating. Mr Smith suffered physical and psychological injuries, for which he received £25,000 compensation. Read more about his case here.

The police, Police Federation, and others, seem to be on a charm offensive to encourage wider adoption of spit hoods and public acceptance of their use. Calling them “spit guards” makes them sound safe and innocent. They’re not. As the examples above show, spit hoods can be lethal and/or cause serious, life-changing injuries. Let’s be honest, stop the spin, and call a spade a spade.