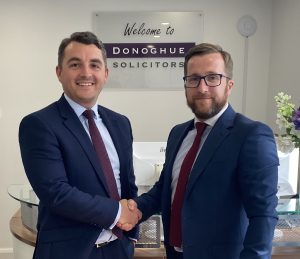 Kevin Donoghue congratulates Daniel Fitzsimmons on his appointment as a director of Donoghue Solicitors.

I am thrilled to announce that my long-time colleague, Daniel Fitzsimmons, has accepted my invitation to become a director of our firm, Donoghue Solicitors Ltd.

His appointment was approved and recognised by the Solicitors Regulation Authority as an “SRA-approved manager – Director” at the firm. (Read Daniel’s official listing here.)

This is why I promoted Mr Fitzsimmons to a role some firms describe as “partner”, and what it means for me, the firm, our staff, suppliers, and, most importantly, our clients.

If you do not yet know Daniel, you can read all about him here.

I first met Daniel when we worked together at DPP-Law in Bootle, Merseyside. We quickly became good friends and allies and have worked together ever since. For over 15 years I have watched as he has grown as a professional and person. It has been my privilege to help and encourage him along the way.

Daniel’s part in the growth of Donoghue Solicitors

In 2010, I set up Donoghue Solicitors, with five founding principles in mind. (You can read them here.) One of these non-negotiable conditions was:

We recruit “the brightest and best” with a strong commitment to the highest legal, professional, and ethical standards.

With that in mind, Mr Fitzsimmons was the natural choice to be my first recruit. I am glad that he readily accepted my offer when I outlined my vision.

Daniel has been my “second-in-command” since 2010, which should not be read as diminishing his role. Quite the opposite, in fact. Daniel never shirks from responsibility, taking the lead role in complex cases, especially actions against the police. He mentors his colleagues, advocates for claimants’ rights in the media, and gives me valuable support and advice, acting as a sounding board as we work through legal problems together. Mr Fitzsimmons also helps me with practical matters, like holiday and family cover, which are essential for me to make sure I can perform at my best.

Daniel did all this while spending evenings and weekends working towards qualification as a Chartered Legal Executive. I took great pride in my friend and colleague achieving this ambition in 2016. It was fantastic for him personally and professionally, and it validated my initial decision to hire him. It also meant that we could continue to pursue our shared goals of helping innocent people get justice.

What is required to become a director in a law firm?

Daniel’s move towards directorship was the natural next step. But, as you might expect, it was not easy. Nor should it have been. To make sure that the firm, our clients, and suppliers were all fully protected, we went through a detailed process involving:

Daniel only took up my offer once everyone had “signed off”. This time-consuming process mattered because we run Donoghue Solicitors applying the highest professional and ethical standards. I had to know that everything was in order, as did Daniel. As expected, it was.

What this appointment means

Daniel’s appointment as a director means he is now, to adopt a term which applies to law firms which do not have limited status, a “partner”. As such, Mr Fitzsimmons is a recognised point-of-contact by the Solicitors Regulation Authority, our insurers, suppliers, clients, and others.

His role also means that those who work for, and deal with, Donoghue Solicitors can be confident that Daniel takes his responsibilities seriously.

Importantly, his appointment helps gives continuity and stability to the firm. This matters, as it comes at a time when many legal practices are dealing with government funding cuts, mergers and acquisitions, and other issues.

We intend to continue in practice as an independent law firm dedicated to fighting for claimants’ rights for many years to come. Daniel’s appointment helps with that ambition.