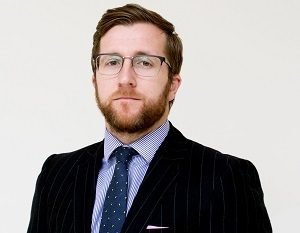 On Monday 8 January 2018 the Independent Office for Police Conduct (IOPC) replaced the Independent Police Complaints Commission (IPCC). The IOPC is now responsible for overseeing the police complaints system in England and Wales.

The government describes the IOPC as “the reformed police watchdog”. Many who dealt with the IPCC agree that change was long overdue. But will it improve the police complaints system?

The Independent Office for Police Conduct has a new leadership structure compared to the Independent Police Complaints Commission. Dame Anne Owers, Chair of the IPCC and its Commissioners, has been replaced by Michael Lockwood, Director General of the IOPC, and a Board. The new organisation has non-executive directors, and executive team, Regional Directors, and a Director for Wales.

The government says this set up:

“will ensure clear lines of accountability and a streamlined decision-making process.” The IOPC says this change was necessary because “Since 2013, we have doubled in size and now take on six times as many investigations. This led us to ask the Home Office for structural changes to better suit our much-expanded organisation. These changes were agreed through the Policing and Crime Act 2017.”

Michael Lockwood is an accountant with a background in local government. Neither he, nor the executive team, regional directors, or Director for Wales, have a police background. They say:

“We are independent, and make our decisions entirely independently of the police and government.”

Government Minister Nick Hurd said the effect of these changes will be to:

“provide powerful scrutiny for policing, with new powers to begin investigations when they are deemed appropriate and be decisive in concluding cases.”

The new IOPC website (www.policeconduct.gov.uk) replaces the old, and to many, confusing www.ipcc.gov.uk site (this domain name now takes you to the IOPC site). The new site is mobile-friendly and easy to navigate. This is important as many people use their smartphones to get access to the internet. In the same vein, the IOPC has replaced the IPCC on social media. Follow it on twitter @policeconduct. Contact the IOPC’s helpdesk on twitter at @IOPC_Help.

What Stays the Same?

As with the IPCC, the Independent Office for Police Conduct oversees the police complaints system and sets standards by which police deal with complaints in England and Wales. It is not limited to the police though, as the IOPC oversees:

Even though the IOPC’s new powers (mentioned in 2 above) come from the Policing and Crime Act 2017, it has yet to implement most of the changes. This means that, on the IOPC’s inception date (8 January 2018) the old, and  much-derided systems, remain in force. For example, the IOPC’s statutory guidance is inherited from the IPCC. The IOPC says that it will update this in summer 2018, and issue advice notes as required. But for now, it is a carbon copy of the IPCC’s police complaints scheme. This means that most complaints are still dealt with internally by police force Professional Standards Departments. This is especially concerning in cases of serious corruption involving senior police officers, as I explained in this blog: Are police sexual exploitation cases being brushed under the carpet?

As the screenshot below shows, a twitter user asked the IOPC when it expects to “be able to initiate inquiries without referral from a force and to determine appeals”. The IOPC said “The Home Office anticipate they will bring these powers in early 2019.” 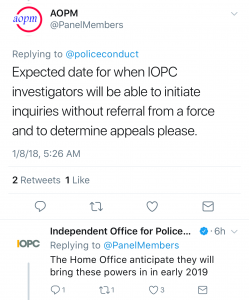 A tweet from the IOPC confirming an implementation date of new powers.

The Challenge for the Independent Office for Police Conduct

Hailing the IOPC, Minister for Policing and the Fire Service Nick Hurd said:

“We are absolutely determined to make the police complaints and discipline systems simpler and more transparent for the benefit of the public. We want confidence in policing to continue to grow and be underpinned by the vital role the reformed IOPC will play.”

While they are laudable aims, people who want to bring complaints against the police now or in the near future are unlikely to notice any changes. They will be met with the same frustrations, delays, and avoidance tactics by the police. For many victims of police misconduct, the inadequate police complaints system adds insult to injury.

I am disappointed that the publicity surrounding the new watchdog was not backed up with real, actionable, power from day one. It’s important for public confidence in the police service that the government and IOPC move swiftly and decisively to implement the Policing and Crime Act statutory powers. Without them, replacing the IPCC with the IOPC will be little more than a wasteful rebranding exercise.